Battle of the Giraffes 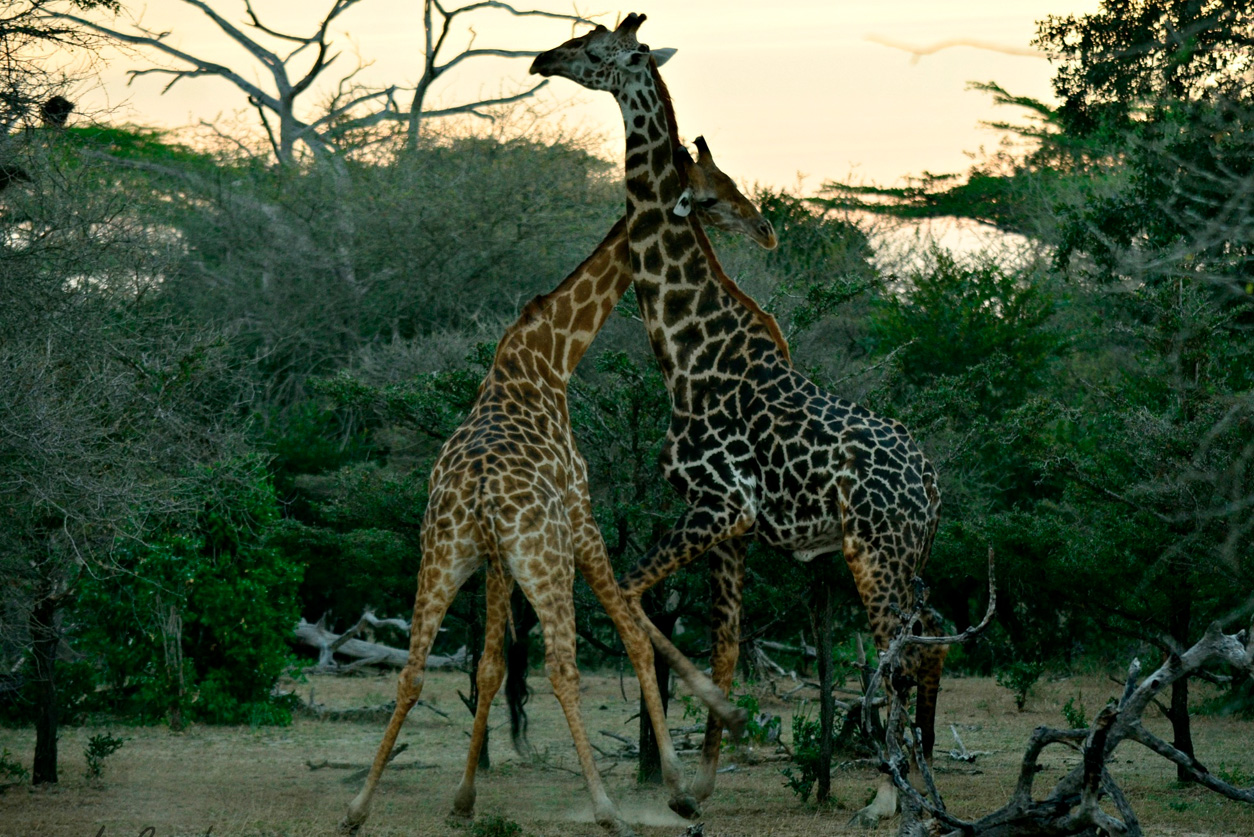 Most giraffe duals are graceful affairs. Bulls swing theirs heads at each other, slow-motion, and normally the weaker of the two soon realises that the fight is not worth the spoils. However, when two bulls are evenly matched, the duals can continue for days and may, as it was the case near Siwandu, end very badly for the loser.

On a late-afternoon safari, Siwandu guide Kim saw two bulls “necking.” The Selous Game Reserve has a very healthy population of Massai Giraffe and bulls sparring are not that uncommon. However, the next morning the guides found the two bulls, still at it. By this time they were past the slow-motion stage of their fight and were well and truly trying to land vicious blows. It was a hit like that which floored one of the bulls and when he tried to get up the “winner” would not allow him. Kim, Siwandu’s head guide says that, “it’s very rare for a giraffe bull to get knocked down in a fight – they normally protect themselves by staying as close as possible to the rivals, not giving the opponent space to target the legs.”

At first the victorious bull circled his rival, urinating as he went along, intent on displaying to the females standing in the distance that he was the stronger of the two. Guides, guests and giraffes alike thought the floored bull would get up as soon as his rival walked off, but once the victor had joined his newly won female in the shade of a nearby leadwood tree the downed giraffe still stayed on the ground. As mid-day approached and all animals hid from the burning hot African sun the injured bull kept trying to get back onto his feet but just could not find the strength. By now vultures had spotted him and their dives alerted hyenas to the chance of a big meal. Late afternoon, as our safaris returned to the scene they were met by a solitary hyena making her way to the giraffe, which was still alive and lying flat on the ground. As the hyena approached the giraffe bull made one final effort to escape the inevitable, but again could not find his feet - watch this incredible video below by our guest Lucy Carr, who captured these last moments. The rest, as they say, is history.

Three days later, when our guides past by there was nothing but scattered bones and skin left. But the sighting will live long in the memory of our guests who got a clear reminder that the African bush is a tough place to survive in!