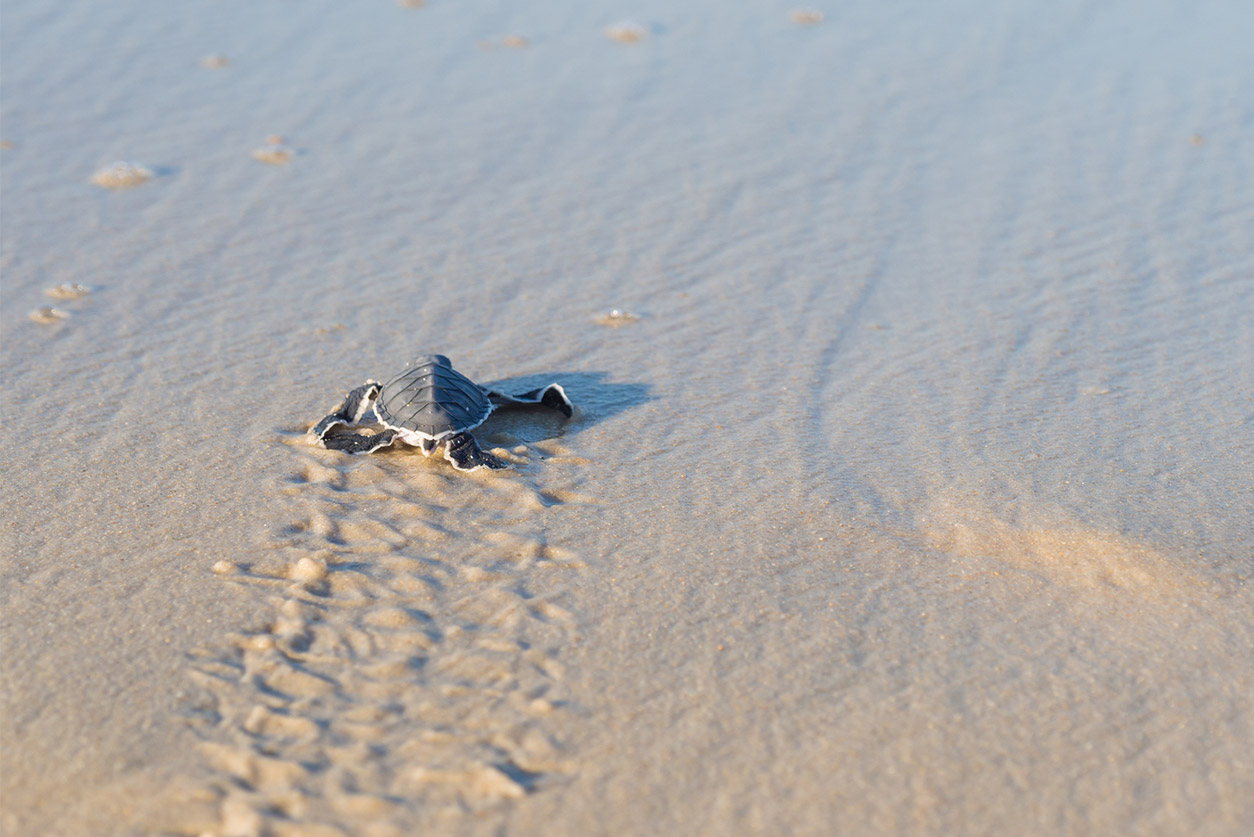 This time of the year marks an especially exciting time on Fanjove island, when tiny green sea turtle hatchlings make their first appearance. From three nests this year, we expect over 300 eggs to hatch on the island till end May!

Worldwide, there are seven species of marine turtles and five of these occur off the coast of Tanzania. These include green, hawksbill, loggerhead, leatherback and olive ridley sea turtles. The green and hawksbill turtles are the only ones who nest in Tanzania. Of these two, green turtles found a safe haven, nesting on Fanjove Island.

Green sea turtles are one of the world’s largest species of turtle. They can weigh up to a massive 130 kilograms and measure up to 1.2 meters in diameter. A strong, tear-drop shell shape called a ‘carapace’, covers their body, with just their head and four flippers exposed. Their carapace can range in colour from shades of brown, to yellows, greens and even black. Their name derives from the uniquely green-coloured layer of fat found under their shells. It is believed this is a result of their vegetarian diet. Unlike most sea turtles, the green turtle only dines on marine plants such as seaweed and seagrass.

By far the biggest threats to turtles off the coast of Tanzania, is the disturbance of their nesting and degradation of feeding habitats, followed by incidental ‘by catch’ net captures by the fishing industry, poaching of meat, their eggs, an increase in land development and pollution. Fanjove Island however, provides a safe space for green turtles to lay their eggs. With minimal human presence and interference, especially during this time when the island is closed to guests in the rainy season, there is an even greater chance of successful egg hatching events.

It is fascinating to note the adult green turtles breed on the beaches where they hatched. Some green turtles are resident, while others are migratory and will move to and from nesting and feeding sites in Kenya, Seychelles, Comoros, Mayotte, Europa Island and South Africa. Females will usually travel from these feeding grounds back to their ‘natal’ or ‘hatching’ beach every two to four years, whereas males may make the journey annually. After mating in the shallow waters offshore, the female will crawl onto the sandy beach and laboriously dig a nest with her flippers. Here she will lay a clutch of about 115 eggs. She then gently covers the eggs with sand and returns to the sea.

Our beaches provide the ideal nesting conditions with steep slopes surrounded by protective grasses and vegetation. Sometimes however we will find the turtles have laid their eggs below the high-tide mark or have nested in areas previously washed away during heavy rains, leaving their entire nests at risk. When this happens, the Fanjove team have to intervene and the nest of eggs are delicately relocated, up to higher ground.

To help us with this delicate task, our team has been trained by SeaSense, a Non Government Organisation (NGO) who works closely with coastal communities in Tanzania to conserve and protect endangered marine wildlife, including sea turtles, dugongs, whales, dolphins and whale sharks.

In March our team relocated two nests (260 eggs) both laid in an area on the beach that washed away during the heavy rains, last year. The eggs were safely relocated and we are optimistic they will hatch and manage to reach the ocean safely. So far the eggs in one of our nests, luckily have already hatched and we are eagerly awaiting the appearance of more hatchlings from the other two nests on the island.

Turtle eggs hatch between April and July each year depending when the eggs were laid. Usually eggs will hatch after 50 to 60 days. The hatchlings will emerge, usually under the cover of night. To find the sea, the baby turtles, no bigger than the palm of a hand, orient towards the brightest direction and use the topography of the surrounding horizon line. It is a treacherous journey for these tiny hatchlings to reach the ocean as they need to evade predators such as birds, crabs and lizards along the way.

The first few years of a green sea turtle’s life are spent floating at sea, where they feed on plankton. As they grow older, the turtles move to shallow waters along the coast, such as bays and lagoons, where they find sea grass to eat. Most marine turtles take decades to mature, between 20 - 30 years and remain actively reproductive for another 10 years.

It's estimated only 1 in 1,000 hatchlings will survive to adulthood. Today, green sea turtles are classified as an endangered species and we need to do all we can to protect them.

We trust in the future an increased number of turtles will nest on Fanjove Island and it is our mission to ensure the island remains a safe and welcoming place for sea turtles to lay their eggs.