The Ruaha National Park is one of the world's most pristine, off-the-beaten-track wildlife havens and a true African wilderness. Located off the obvious tourist circuit in the South of Tanzania, it should be on every nature enthusiast’s travel bucket list.

The life-giving Great Ruaha River and other rivers that run through the park enhances the overall experience.  Until recently, before the Nyerere National Park was established in 2019, the Ruaha National Park was Tanzania’s largest national park.

This park is home to an abundance of wildlife, set within a diverse and interesting landscape punctuated with gigantic baobab trees, rocky hills, open grass plains and miombo forest. Those who drive through the park gates, enter an untouched and vibrant natural world that defies imagination.

When was the Ruaha National Park established?

The Tanzania National Parks Authority (TANAPA) established the Ruaha National Park in 1964 and since then more areas adjacent to the park have systematically been incorporated. Ten years after it was established a section of land in the South Eastern part of the Great Ruaha River was joined and by 2008, an important wetland area around the Usangu Game Reserve was incorporated too. At the time, it was the largest national park in Tanzania, until 2019 when the Nyerere National Park (formerly the Selous Game Reserve) was proclaimed in the South. Today, at 20,226 km2 the Ruaha National Park is the second largest national park in Tanzania.

The history of the Ruaha National Park

Although the Ruaha National Park was officially added to TANAPA’s portfolio of parks in 1964, its roots date back to 1910 when it was first proclaimed the Saba River Game Reserve by Germany.  In 1946 the British government renamed it the Rungwa Game Reserve and in 1964, three years after Tanganyika got independence from Britain, the southeastern area of the Rungwa Game Reserve was elevated to national park status, changing its moniker once again, to Ruaha National Park. The name ‘Ruaha’ is derived from the Hehe word ‘Ruvaha’ which means ‘river’.

What is unique about the Ruaha National Park?

As one of the most remote tourist destinations in Tanzania, the Ruaha National Park is one of the least visited national parks. This, combined with its massive size, results in safaris that feel super-exclusive and all the more special with low numbers of game vehicle traffic. In contrast to popular and more iconic national parks or private concessions, it is rare to share your sightings with other vehicles, let alone queues for sightings. There are not many naturally wild places like this left in our world. The Ruaha has a flourishing eco-system that is pristine. Known for its majestic, old baobab trees you will find dotted throughout the park, in the dry season these giant trees shed their leaves, leaving the branches exposed. 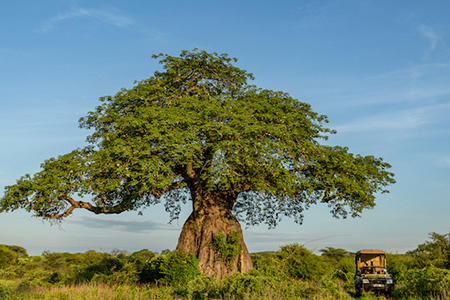 The branches look alot like roots, hence the nickname the ‘upside down tree’.  Given the size of these trees, poachers used to hide inside baobabs, in days gone by. During the rainy season these beautiful baobabs have a flush of blooms which form a pretty bonnet.

The Great Ruaha River is also one of the main attractions and key water source during the dry season, a magnificent arterial route to explore on game drive, often resulting in rewarding and dramatic wildlife sightings.

What is the wildlife experience like in the Ruaha National Park?

The wildlife experience in the Ruaha is magnificent and combined with the low number of annual visitors it is a spectacular safari destination, promising unhurried, uncrowded game viewing. The Ruaha National Park has the highest concentration of elephants in East Africa and is home to 10% of the world’s lion population. Rare antelope species can be found here include the greater and lesser kudu, roan, sable antelope, Lichtenstein’s hartebeest, Topi, Southern and Bohor reedbuck. This park is the southernmost limit on the African continent where you will find lesser kudu and the Grant's Gazelle.
‍
Although there are no rhinos in the park, there are healthy populations of wild dog, leopard, lion, cheetah, buffalo, hyena, black-backed jackal, bat-eared foxes, giraffe and elephant. Vast herds of buffalo, as well as cheetahs can be found on the plains, while the leopards reside in the more dense, shadows of the woodlands. On the shores of the Great Ruaha River you will encounter countless crocodiles and hippos. Large herds of elephants can be seen especially during the dry season when they gather around the dry riverbeds digging for water with their trunks and front feet. A staggering 10,000+ pachyderms frequent this area.
‍
The park has an abundance of bird species, with 574 species of birds recorded in this area. The great cross-section of vegetation and altitude contribute to this. Interesting species include the eponymous Ruaha red-billed hornbill and the Ruaha Chat where it was first observed in Ruaha and named accordingly. During the rainy season between February and April migrant bird species from Europe, Asia and Madagascar arrive in the Ruaha.

Ruaha also has beautiful landscapes dotted with acacias, baobabs and over 1,650 plant species. 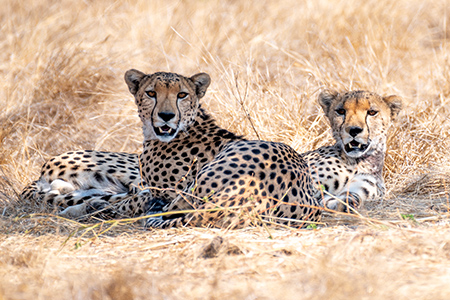 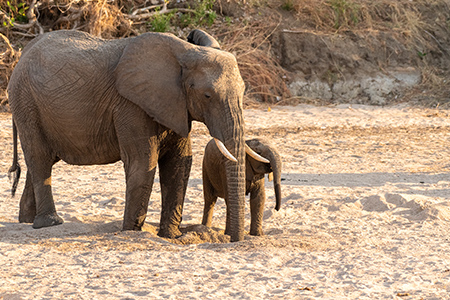 Which time of the year is best to visit the Ruaha National Park?

The best time to visit the Ruaha National Park is during the dry season from June to October. This coincides with the main safari season in East Africa. It is also relatively cooler during this time compared to the hotter months between December and March. With the bush less dense and grasslands receding, this time of the year it is excellent for spotting game, game viewing and photographing wildlife is much easier.
‍
In the Ruaha National Park during this time of the year most rivers, except the Ruaha river, will be dry. A game drive along the Ruaha river bank results in rewarding sightings. In the dry Jongomero river bed in front of the camp the ellies can be seen drilling water from deep under the ground, using their trunks as nifty tools to get the job done. They know all about the fresh underground water reserves which can be found here. Other animals follow them and swoop in afterwards for a refreshing drink.
‍
June is also the breeding season for the greater kudu so you will see lots of males with their elegant twisted horns.
‍
During November and December Ruaha usually enjoys its first rains after a long dry season. This signals the start of what is called the ‘short rains’. A few weeks after the first rains have fallen, the landscape dramatically changes. Depending on how much rain is received, new grasses, leaves and flowers may appear, painting the landscape in colour. This is also the time when we welcome nursery herds with hundreds of adorable, newborn skinny-limbed Impala calves. The Impala ewes are biologically programmed, they know the short rains are on the way. This leads to ample grazing which makes nursing and raising their calves easier. The predators know this too. With an abundance of calves, they eagerly await opportunistic meals.
‍
Game is still plentiful, even though their movements will change as they tend to move further away from the rivers as more noticeable, small pools or pans of water form deeper in the bush. The ‘green season’ marks a typical dry spell during January and February before the long rains start again, in March. At this time of the year the vegetation is green though the grasses are still receded allowing for good game viewing conditions. Short bursts of afternoon showers may be experienced during this time. Big herds of elephants can be found roaming the area, while it is also a great time for avid birders to visit Ruaha with a variety of migrant bird species arriving. Landscape photographers will also enjoy visiting during this time as wildflowers make their appearance and the landscape becomes lush and green.
‍
Most camps in Ruaha will close for the duration of the long rainy season from mid-March to end May. The roads get muddy and difficult to navigate during the presence of rain and accessibility is often limited. From the first of June onwards camps reopen for the main ‘safari season’. During this time the rivers are in full flow and the bush will be green and lush.

The main gate of the Ruaha National Park is located in south-central Tanzania about 120 kilometres (75 miles) west of Iringa and 625 kilometres from Dar es Salaam. Jongomero Camp is located 70 kilometres (43 miles) from the main gate. The park forms part of the Rungwa-Kizigo-Muhesi ecosystem which includes the Rungwa Game Reserve, the Kizigo and Muhesi Game Reserve and the Mbomipa Wildlife Management Area.
‍
Due to its remote location, the best way to access the park is by air. There are frequent scheduled flights from either Dar es Salaam, Central Serengeti, Arusha and Zanzibar. There are several airlines serving this route, some of which include Coastal Aviation, Safari Link and Auric Air. All these airlines have a reliable service and credible safety record. Guests visiting Jongomero camp can fly directly to Jongomero airstrip. Approximate flight time from Dar es Salaam is between 1hr 20 mins and 2hr 30 mins (depending on type of aircraft and number of stops).
‍
Ruaha National Park can also be accessed by road from Iringa. There are a number of tour operators providing transport from Iringa. It is advisable to travel with 4x4 wheel vehicles. A journey by road from Dar es Salaam will take around nine hours.

Staying at Jongomero Camp in the Ruaha National Park

After successfully launching Siwandu in the Nyerere National Park (former Selous Game Reserve) in 1988 and Ras Kutani on the South Coast of Tanzania in 1992, Selous Safari Company searched for a new adventure to complement the current itinerary. In 2002 Jongomero camp opened its doors for the first time.
‍
Jongomero camp offers tranquillity amongst magnificent shaded trees, right on the banks of the scenic Jongomero sand river. Tucked away in a remote corner of the Ruaha National Park, some 40 kilometres (25 miles) from closest neighbours but super easy to access, just 10 minutes from the airstrip and 70 kilometres (43 miles) from the main gate.
‍
Accommodation at Jongomero comprises eight large and well-appointed tented suites, built on raised wooden platforms, under enormous thatched roofs encompassing a spacious private deck overlooking the dry riverbed.
‍
The road network around camp was primarily developed by our knowledgeable guides and therefore perfectly placed for superlative game drives, with the blood-pumping thrills of tracking animals and the reverential calm of learning about this incredible environment. 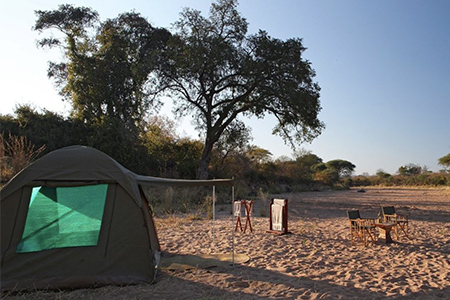 For pre-booking only, Jongomero also offers a great combination of walking safaris and/or ﬂy-camping on one of a three-night stay. Experience the adventure of sleeping in a small, domed tent under the African star canopy, the freedom of showering under the trees and the ultimate adrenaline rush of walking on foot in big game terrain. Our ﬂy-camp operates from mid-July to mid-November. Walking safaris are conducted with both an armed, specialist walking guide and an armed TANAPA guide.
‍
For more information contact our reservations team at reservations@selous.com.

How many days should you set aside to explore the Ruaha National Park?

We recommend you spend at least four nights at Jongomero in the Ruaha National Park. This will give you a good taste of all there is to experience in the area. If you have more time to spare you can take advantage of our special longer stay value added packages by staying for seven nights and only paying for five nights.

Where should you head to next?

Combining the Ruaha National Park in the South of Tanzania with a land and water-based safari experience in the Nyerere National park is a popular choice for our guests.

The Ruaha National Park is a hidden gem tucked away in one of the most remote wilderness areas in Tanzania. It is the perfect safari destination for anyone who loves exploring places away from the crowds and into the heart of Africa. We invite you to step back into time and immerse yourself deep into the beauty of nature.